My first experience with a weeklong bicycle tour was filled with excitement and wonder. Wonder that I was able to just survive and complete a 500+ mile tour that included over 30,000 feet of climbing through the beautiful Colorado Rockies. The fifteenth anniversary of the Tour of Colorado began and ended in Glenwood Springs, and was difficult, even by veteran tourist standards. 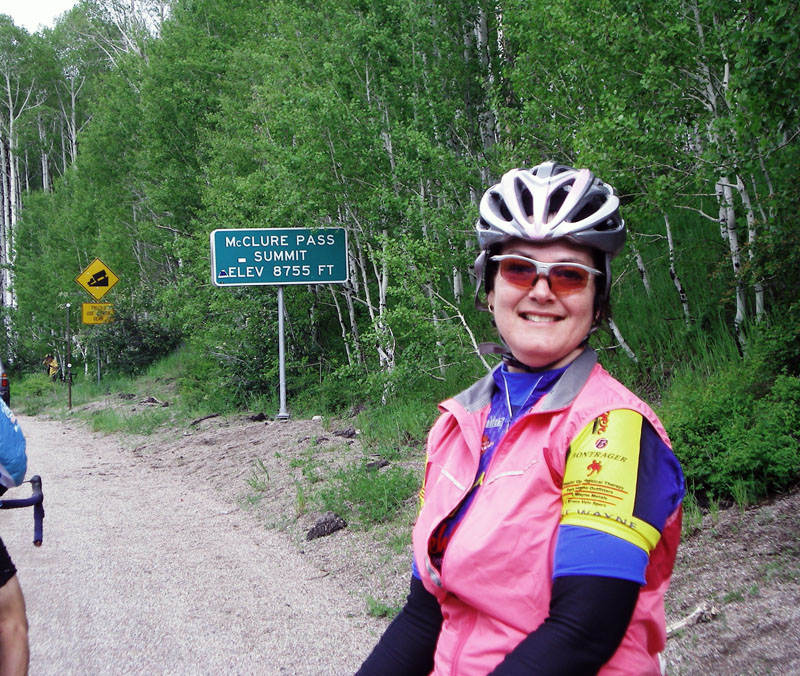 On Day 1, we biked 79 miles to Hotchkiss. The day in- cluded a three-mile climb over McClure’s Pass (8,755’) and my first experience with a true Colorado fast descent.

On Day 2, we biked 91+ miles to Grand Junction. This day included a twenty-mile climb over the Grand Mesa. A native Coloradoan described the Grand Mesa as one of Colorado’s monster climbs. He was so right. This was the most difficult day of the week for me. But, the descent was so much fun that I soon forgot all about the climb.

Day 3 included an optional 40 miles loop through the beautiful Colorado Monu- ment, which I opted to not ride. I was disappointed but also wanted to pace myself to complete the entire tour. We rode the regular and easy 63 miles to Montrose with calm winds, arriving at our destination by 11 am. Cyclists who arrived later in the afternoon suffered a 35 mile an hour head wind.

The morning of Day 4, cycling 93 miles to Crested Butte, we endured what was said to be a typical head wind in route to Gunnison. Before starting the climb to Cerro Summit (7,950), my cycling partner spotted a mother and cub bear off the road side of US 50. Cycling past the Blue Mesa Reservoir was very beautiful. After tackling the climbs that were moderate in comparison to the rest of the week, the road took a gradual uphill climb to Crested Butte that I found less difficult than I had expected. When I crested a hill upon reaching Crested Butte, I could not resist a victory shout when I saw the school we would be staying at.

Crested Butte was the destination where we would enjoy a rest day on Day 5. My first stop in the early morning was to the Crested Butte Laundry that was filled with other cyclists. It was actually a big party and I met some really great people and we shared our stories. After laundry was done, I enjoyed walking around town and shopping for some gifts for family and friends. I also found a great steakhouse, Maxwells that had an Internet service. I brought my netbook with me and was able to surf the web, check email and upload photos to my Facebook page. 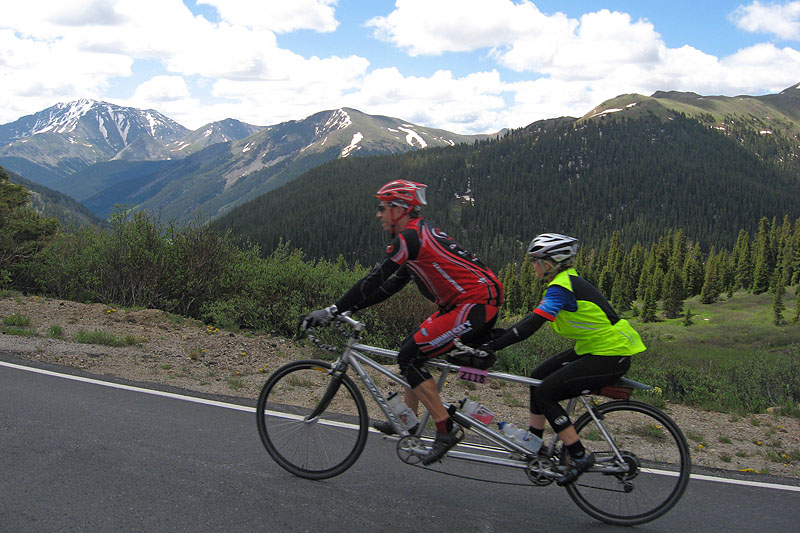 Day 6 was another challenging day as we had a 73 miles ride to Buena Vista up over Cottonwood Pass (12,326) via a 14 miles uphill dirt road! If this was not enough, there was a 60% chance of rain! This day, the raincoat I had been carrying all week became worth its weight in gold, just for the warmth it provided. As usual, my cycle partner and I left early hoping to get as far as possible and hopefully to the destination before the rain came. He made it and I had five minutes left when the rain poured. We were lucky. Many cyclists had to be taken off the mountain in baggage trucks because the road was closed soon after the rains came. The descent off of Cottonwood Pass into Buena Vista was fast and it was cold. When you’re climbing, your en- ergy helps keep you warm but when you are descending at a fast or any pace, you are just sitting there and freezing at those altitudes. The rain made the cold, wicked cold.

Day 7 was the final and longest day: 107 miles up over Independence Pass (12,095’) with a long descent into Aspen and then another 40 miles back to the point of the beginning, Glenwood Springs. This day was fun but with a few scares. We left earlier than usual, at 4:45 am. A deer jumped in front of us leaving the school. We must have been one of the first riders out. Luckily, no contact. Then going into one of the forests leading up to Independence Pass, a long horned mountain sheep jumped off a 12 foot or so rock cliff onto the road in front of me with a huge explosive type sound. I stopped quickly and looked to the left and saw three more sheep staring down at me. I waited patiently for them to jump down and run away but they just continued to look inquisitively at me. I finally said “Shoo Shoo” and continued riding my bike down the road. They were funny. They gingerly climbed down the side of the rock, stayed in the forest on that side of the road and I heard them running along in the woods by me for about a quarter of a mile or so.

Continuing on to Independence Pass, just like Cottonwood, I found the high altitude really affecting my ability to concentrate. So I found myself asking myself questions to help keep my thinking straight. Okay, yes I talked to myself. It helped. It was a slow way to the top and I was so happy when I reached the summit. While I had hoped that I would be “coasting” into Glenwood Springs from there (about another 60 miles), it was not quite that easy as the descent was the most treacherous of the week and a heavy headwind into Glenwood Springs came to slow things down.

The finish was amazing. Another friend I made during the week found me the last twenty miles and he offered to pace me back. I was happy to ride behind him and be sheltered from the headwind. It made the final ride really enjoyable and he took a great picture of me crossing the balloon archway finish line. Most amazing there were spectators clapping us on when we arrived.

I trained hard for the tour but nothing could really prepare me for the altitude and the mountain climbing. I did find that the training gave me the endurance to take the 500+ tour at my own pace. I was careful to not jump on any fast moving pace lines because I did not want to burn out before the tour was over. I took each day as a challenge and I finished every day Yes, I enjoyed the scenery but I was more interested in completing the day’s challenge. My riding partner (who I met at the start of the tour), liked to start early too. We both had similar speeds until we got to the hills. He was faster and would go ahead at his own pace. I had been told and found this to be very true that it is important for a cyclist to climb the hills at their own pace. During the tour, I saw cars and truckloads of sagging cyclists. I was happy that I was able to ride the entire tour without sagging. My first tour is not my last. I hope to be back in Colorado next year for another bike tour.

I also feel really blessed to have good cyclist friends who helped prepare me for the tour. The other veteran cyclists from Fort Wayne who traveled with me and who I hung with in the evenings were Steve and Cindy Souers, Pam McCulloch and Greg Duncan. Plus, I made new friends while on the tour. One of them is helping me prepare for my next difficult bike ride. I met some of the most interesting and incredibly fit people during the BTC. It was one of my best vacations ever. If you have never done a weeklong bicycle tour, you might just want to give it some consideration. See the world on your bike! You will never regret it! 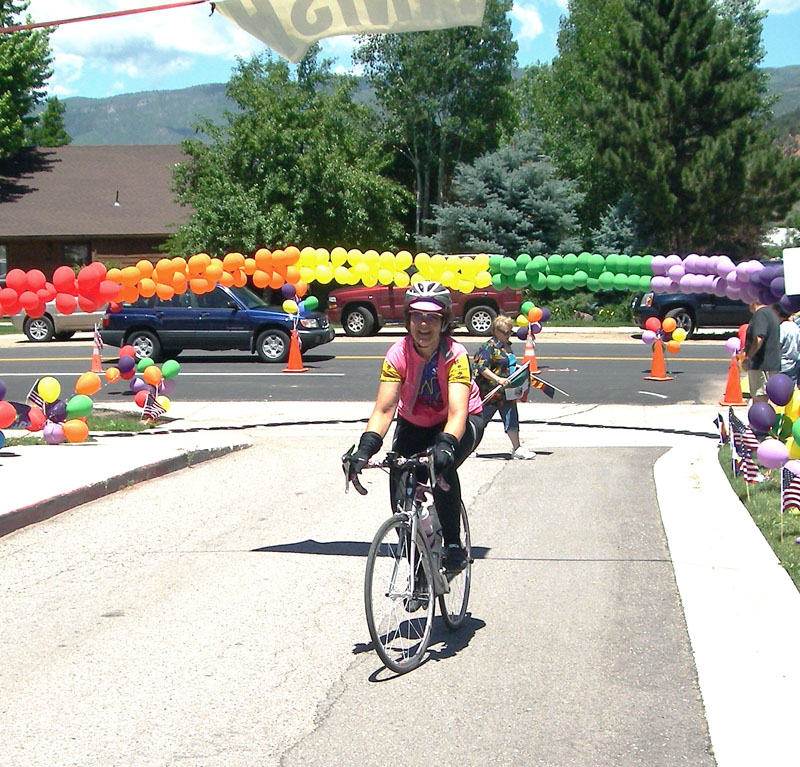