So how does racing compare to those weekend touring rides? Memorial Day weekend I raced the 50k Citizens class at The Great Race in Elkhart. The morning starts out with an hour drive giving me plenty of time to waffle back and forth between confidence and apprehension. 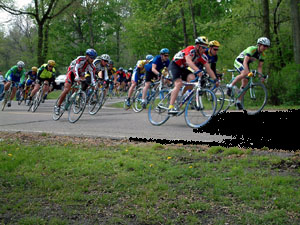 After registering and getting my bike ready I got to watch groups of USCF racers take off every five minutes, making me question the wisdom of my choice to go racing this weekend.

Finally it was the moment of truth, rolling to the start line and listening to the official’s instructions. Then the lead car pulled away and I was racing!

Early on a few riders would drift off the front, trying to break away, only to be reeled back in by the pack. I even jumped once, only to find myself swallowed up too. Trying to ride as fast as possible to stay with the pack and watch what was going on in front of me stirred up a few butterflies in my stomach. After a few miles I finally settled into the rhythm of the pack and relaxed a bit mentally and physically. I even managed to drink both of my bottles and eat a Gu while flying along the road in the middle of the pack.

I found my spot eight to ten riders back. This was close enough to the front to keep an eye out for any successful breakaways and also to avoid trouble further back where some of the riders with poor handling skills were riding. I followed the advice from some of the 3RVS racers, never work without a reason. With this in mind I avoided moving to the front to take my pull, opting to let others do the work, while I hung out eight to ten riders back. The other advice I received was to relax, which is hard to do riding four abreast at 25mph plus, especially when you occasionally bumped into another rider. A couple of times I heard the sounds of metal as someone farther back in the pack would rub a wheel, then panic and go down.
As the pack approached the end there was still a large group together. My legs were feeling pretty good, but I soon got an education about the mental side of racing as teams and riders began to plot their tactics for the finish. With about a mile to go I heard three guys flipping through their gears behind me and was able to jump on their wheels as they broke away and gapped the field by 150 meters. Boy did I feel smart and strong, having anticipated the break and actually making it, but the pack was able to suck the four of us back in short order.
When the sheriff’s lead car pulled away the real tactics began as everyone began positioning themselves for the final two turns before the finish. My earlier strategy of hanging back a bit came back to haunt me as I found myself boxed in and unable to move up, even if I would have had the legs to sprint. I finished in the field, 25 feet and 15 places behind the winner. Obviously I need to spend a few Tuesday nights hanging out at the race training rides.

So how does racing compare to those weekend touring rides? Remember when you are feeling good and you sprint for that town line once in a while? Try maintaining that pace for an hour. Remember when you look at your computer after a ride and it shows an average of 20mph? Me neither, but this day my average was 24mph. Remember how you move to the front every so often to take your pull on a club ride? Don’t do it, just be a wheelsucker. Remember how much fun you have when you have a great ride? That’s what racing is like, FUN!