The very best thing about riding on the weekend club tours is the opportunity to talk with other riders. During a club touring ride last fall, Jim Reilly told me about his desire to ride and camp. This spring he did a week long, unsupported tour from Washington, D.C. to Pittsurgh, PA.

After Jim got back from his bike trip, we talked about riding an unsupported Chain O’ Lakes and Pokagon tour. That morphed into a one-night trip to Pokagon, a revival of the 3RVS camping tour of many years ago. Jim pitched the idea to the 3RVS club officers, and with their approval, Jim quickly and carefully arranged the details. Steve Pequignot prepared a detailed tour map for us up to Pokagon and back, along with shorter loop options which Saturday tour riders could choose. 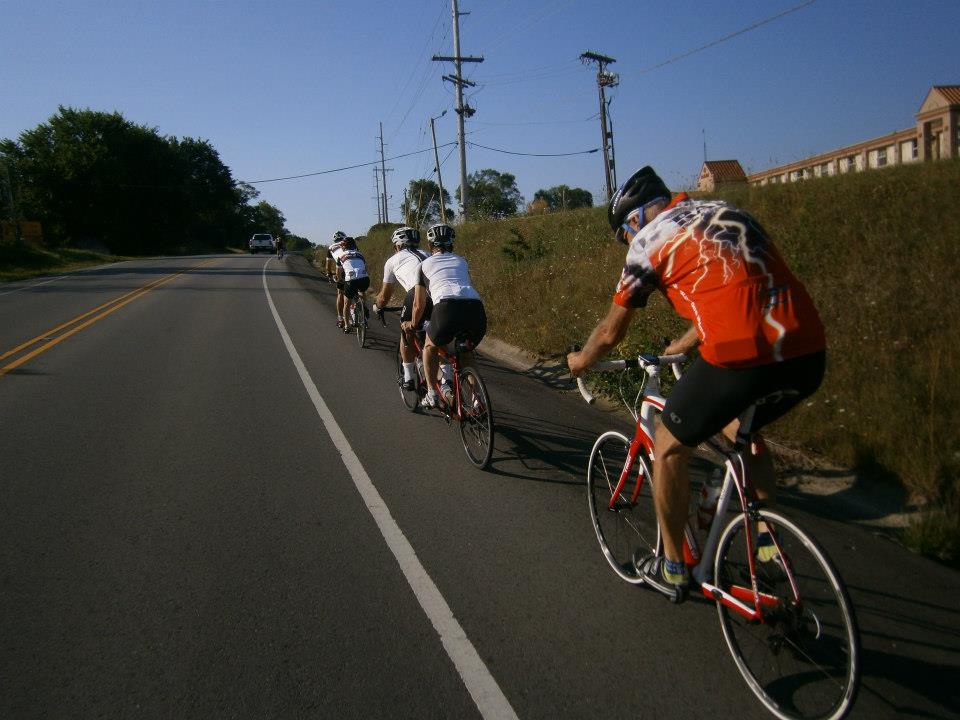 We gathered at the Carroll High School north parking lot about 45 minutes before the regular Saturday touring group departure time. Our supplies for the evening and next morning were loaded into Jim’s pickup truck, which Luis DeVeyra offered to drive up to Pokagon for us. Seven riders signed up for the ride to Pokagon: Kent and Anne Ellis (on their tandem), Steve and Cindi Souers (on their tandem), Jim Reilly, Shaun Fitzgerald, and Bill Lambert. Shaun planned to ride with us to his grandparents, who lived next to Pokagon State Park, where he would meet his wife and drive back with her.

We departed at about 9:10 with the regular Saturday touring group. A long, double pace line coursed its way over the rollers of Auburn, North County Line Roads. On County Road 11A in DeKalb County, the group divided into two - the faster Saturday touring group, and most of the camping group, with both parties planning to meet in Ashley. However, a wrong turn by the faster group gave them an opportunity for bonus miles as they back-tracked a couple miles to get back on the route. This put the camping group ahead of the regular day-tourers. The two groups merged at County Road 28. K-Mart Dave stopped and was perplexed about whether to ride to Pokagon with us and maybe get a ride with Luis back to Carroll, or to turn back there. I stopped with him and offered him a map, but he had a map and was familiar with DeKalb County. After some discussion, he decided to turn back there.

This put me well behind everyone. I continued northward on County Road 19, and caught up to Kent and Anne on a steep uphill. Just ahead of them was Bernie Drerup, out for a leisurely 80 mile ride. At 18 mph. Uphill. Bernie rode with us up to Ashley, and waited with us as everyone talked and laughed in the warm August sunshine. The regular touring riders soon departed and us campers gradually decided it was time to head on. Bernie rode with us another 6 or 7 miles, to Steuben Co 400S, where he turned eastward toward Pleasant Lake.

The miles rolled quickly away as I followed the tandems most of the way, while Jim and Shaun rode up front. I got a kick out of watching Jim and Shaun pedal like crazy on the downhills to stay ahead while the tandems crept up quickly behind them. A benefit of riding with tandems is it becomes a rolling party. Kent and Anne and Steve and Cindi laughed and joked and before long we found ourselves at 200N and Wayne Street, on the north end of Angola. An Applebee’s presented itself where we ate lunch.

After lunch we rode the few remaining miles to the entrance of Pokagon State Park, where we encountered a long line of cars waiting to get in the park. Unaware of the stares we were getting, we marveled at the beautiful weather, and the unbelievable late August greenery. When it was our turn to pay, Jim put the State Park entrance lady on the spot by asking, “OK, how much for our group?” She looked at the tandems, but then stated, “$2.00 per person”, which was the policy Jim had understood before the trip. 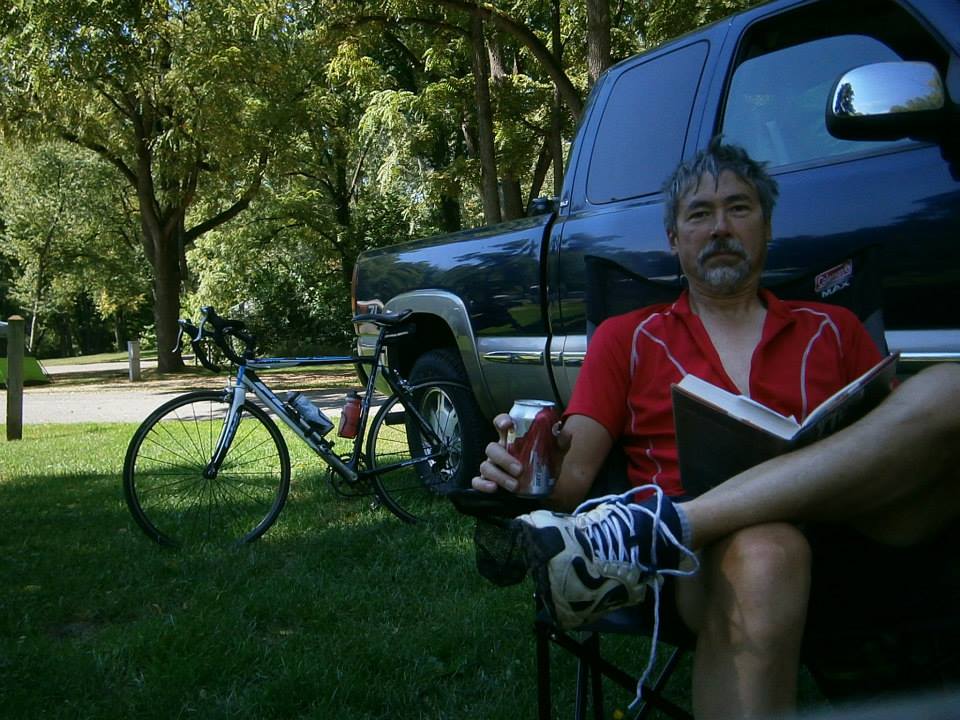 We rode on the asphalt ribbon through Pokagon’s woodland beauty toward our campsite. I stopped by the south beach parking lot to see if I could spot the nesting Merlins (a falcon which normally nests north of the Canadian border). I quickly spotted birders with long-lensed cameras who eagerly pointed out an immature Merlin at the top of a spruce tree. Feeling happy seeing my first Merlin, I rode to Campground 3 where I found our group lounging beneath the shade of a large, spreading black walnut tree. Luis was there, and had unloaded our gear for us.

Luis stayed with us for a couple hours and we sat and chatted and marveled at the clear, blue sky. After Luis left, we got busy with preparing supper. Jim fired up his portable, propane grill and we opened our coolers and shared our food. We cooked our smoked sausage, prepared dehydrated entrees, and ate potato salad, fruit, chips, and wasabi-flavored almonds. We cleaned up our dishes after supper, then set up our tents. We had two huge campsites, side-by-side, but the flat space for tents was scarce. In our personal searches for flat ground, we ended up widely scattering our tents across the two sites.

I noticed there were many people walking through the campground, who stopped and watched us for a bit, before they moseyed on their ways. I looked at our campsite - four tents, two tandems, two bikes, and no other vehicles - no camper trailers, and not even a car!

After a sound sleep, I got up just as the sun began to come up. I saw movement over by Steve and Cindi’s tent. Steve was sitting up, outside the tent, with his shirt off. It was then I realized he had slept outside. I stirred the ashes from the previous night’s fire and blew on the few remaining embers to ignite some kindling Steve whittled the night before, as we tried to guess what shape he would carve out of a hunk of firewood. My attempt to get the fire started was aided by Steve’s supply of laundry lint. I put on a pot of water on the campfire grate to boil for coffee, and Steve put on a canteen for coffee and oatmeal, and Kent was up soon with his cup of water in place on the grill. Jim, Anne, and Cindi soon joined us by the fire. We stared intently at the water, waiting for it to boil. The longer we waited, the more we realized the water would probably not boil. Jim fired up his portable propane grill, and we transferred our vessels to the grill. There was room left over on the grill, so I decided the group should have a proper Dakota breakfast and put the remaining smoked sausage I had left on the grill.

Everyone, but me, brought oatmeal to eat. Steve and Cindi and Jim brought Starbucks Via instant coffee - a perfect camp coffee, since they simply added hot water and they had instant coffee-shop coffee. 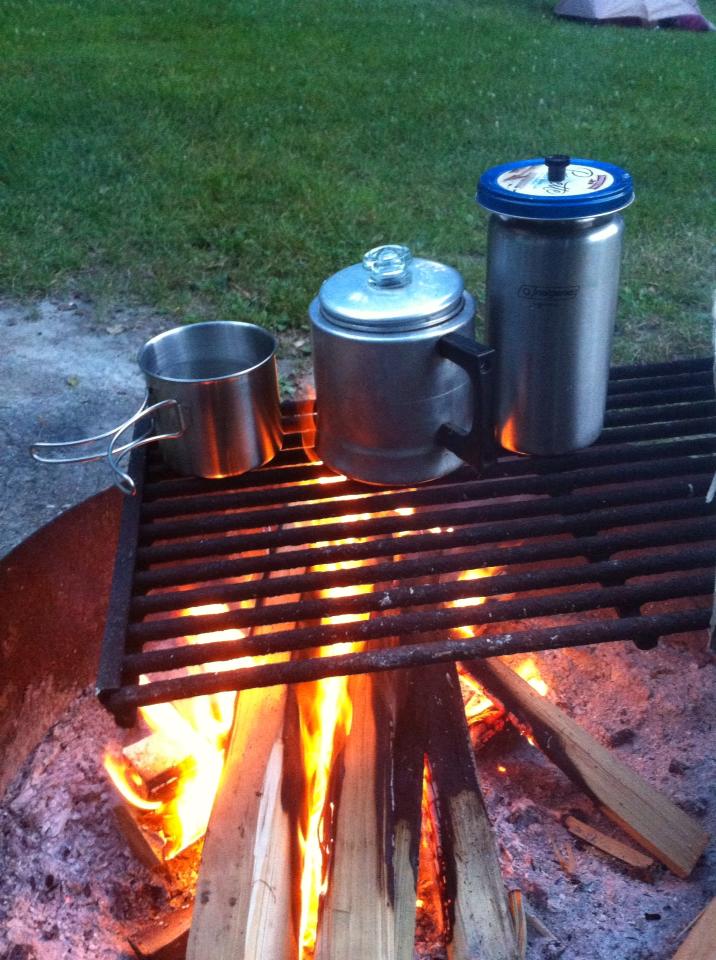 I don’t know what it is, but coffee cooked outside always tastes best. The sausage and potatoes (potato salad, that is) made a delicious breakfast for me, and I noticed Kent, Jim, and Steve were going for the remaining sausages. Cindi yelped when Steve reached for the potato salad. For reasons you will have to guess, Cindi reminded Steve what happened after he ate the potato salad the night before. Since she rides immediately behind Steve, she highly recommended he stay away from it.

We broke camp and just as we had rolled up and packed our tents, Luis showed up with Jim’s truck. Right on time. We loaded Jim’s truck with our gear, and headed out. Luis rode out on his bike with us - he was going to ride for a while before coming back to the campground for Jim’s truck then head back to Carroll. We all stopped by the south beach parking lot to hopefully see the Merlins. One showed up after 5 minutes or so, and then we were on our way. On our long climb up the road which heads into Angola (Wayne Street), Luis turned east on 300N to look for the rock which marks the location where Indiana, Ohio, and Michigan meet. Once we crested the big hill, I realized the wind had changed direction from the day before, and was now coming from the south-southwest. This meant a headwind all the way back. Soon I realized that riding with tandems was great. Although a bit slower on uphills, tandems are much faster going downhill and are pretty fast on the flats. I also noticed that Cindi and Anne are more expressive with signaling road hazards and upcoming turns since they don’t have to worry about steering into the ditch when making such motions. I especially appreciated Cindi’s double flashing of her palms at four way stops.

Rolling on the newly chip and sealed Fox Lake Road, I realized how lucky we were to again have such beautiful weather for our ride. We worked our way through the rolling hills of Steuben County and passed through Pleasant Lake. I looked down at my odometer and couldn’t believe we’d traveled 14 miles already! We stopped at the Marathon station in Ashley again for a quick snack, and then headed back out to the south.

We arrived at Carroll High School at 12:30, where Luis had just arrived with the truck. Plans were quickly made to eat pizza for lunch and talk some more about biking. Our trip covered 104 miles over the two days, with an overall average pace of 17.0 mph. I can’t wait for next year’s trip! 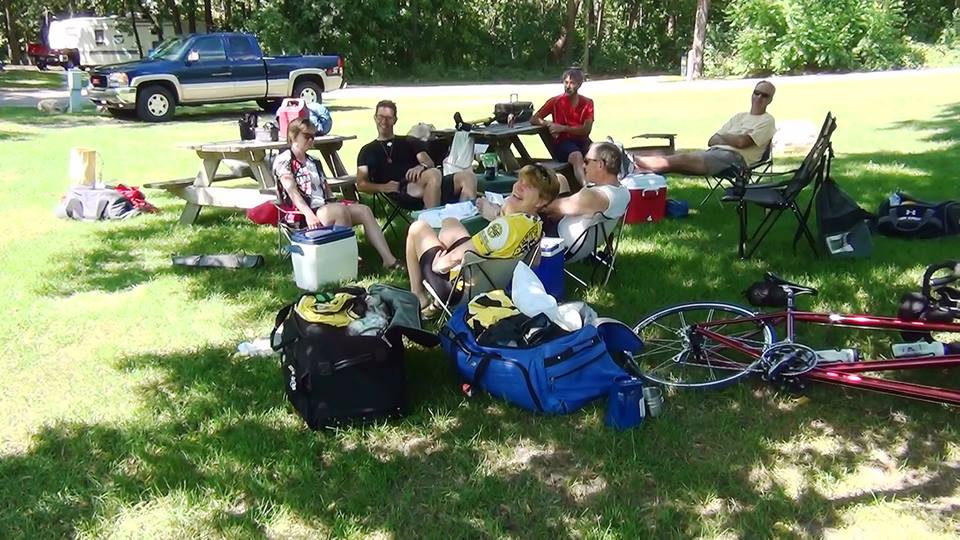