Written by Mona Will

Hilly Hundred-oh the stories that are told by cyclists who have experienced the hills of this infamous weekend ride. Though I knew of the ride, I didn’t really know all the subtleties until I experienced it for the first time a week ago.

Here is a little background of what I did know: hills, hills, Mt. Tabor, and more hills. That’s what all the guys talk about when the subject comes up. Ask a woman who has ridden there and then you get a fuller description of Hilly Hundred experiences.  This is why I’m writing this article; I think it’s only fair that you know what really happens on the Hilly Hundred weekend.

Did you know that there is great bike related shopping right on site in the vendors tent? YEAH!! I found a bunch of great cycling clothes but didn’t bring enough money to buy all that I liked. There were also bikes and bike frames for sale and all kinds of colorful tape for your handlebars AND colorful tires.

Did you know that there’s a sag just about every 15-20 miles so you don’t have to worry about starving while you’re riding?  The best parts of the sags are   ice cream, fried chicken, peanut butter and jelly or honey sandwiches, plus veggies at every lunch sag, along with great live music and yummy muffins. 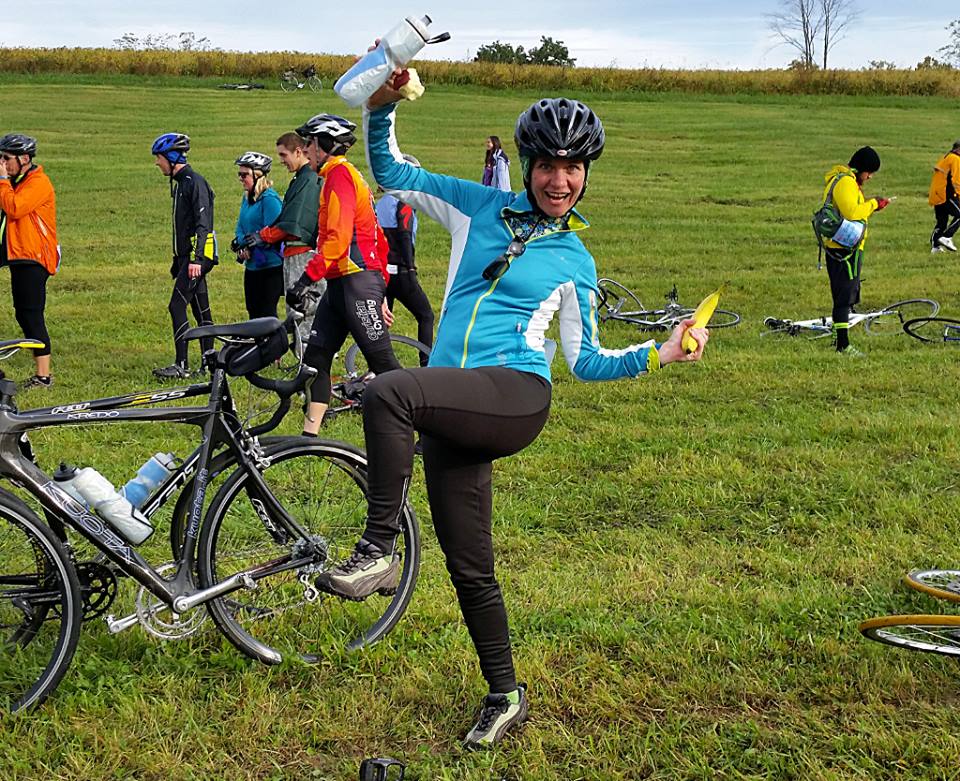 Oh…and how could I forget to mention the spectacular clown band that makes your toes tap and your hips sway even though 10 minutes earlier, you had just finished a day of riding and were feeling so worn out that you weren’t sure if you had enough energy to even lift your leg over the saddle.  YES…these too are elements of the Hilly Hundred that somehow don’t seem to get mentioned in most of the stories or at least not in the first part of the stories.

Going with someone who has done the ride multiple times is both helpful and a hindrance. Helpful because you are guided through the maze of people in the safety talk line, the registration packet line, the first morning of finding a parking spot, maneuvering the bike in and out of people walking plus other people riding their bikes, and people driving their cars all at the same time. Hindrance because they know the bike route and warn you in advance of what to get ready for so your blood pressure spikes, you shift down prematurely and overall you are a bundle of nerves sooner than maybe what is necessary.

I personally found ignorance to be bliss. Not knowing what was around the corner and/or not reading the sign along the side of the road that names the hill and the percent grade, leaves one to experience being in the moment rather than anticipating the moment. In other words, just keep looking forward, keep the pedals moving and shift before it gets too hard to pedal altogether.

Those hills at the Hilly Hundred make the hills between Homestead and Roanoke seem like bumps in the road. There is no doubt about it, the hills are doosies. Even by riding all summer long it is still challenging and it doesn’t let up. One hill follows another follows another. When sailing down a hill at 35 plus mph, you are eventually going to have to regain that loss in altitude by climbing back up. I’m not saying that you shouldn’t “woo hoo” while you’re flying downhill; it is a real rush and unforgettable, but the burn in the quads and your lungs a few miles later will remind you that “what goes down, must go up.”

I never tired of an unsolicited comment such as “Hey Ft Wayne-way to go” or standing in a warm ray of sunshine at a sag and seeing a fellow 3RVS member there. It often lifted my spirit and encouraged me to keep on going knowing a friend was on the same route and having to do the same thing that I was. Each day presented a very challenging ride but by the end of the day, it was extremely rewarding to know that I had accomplished something that I had never done before. 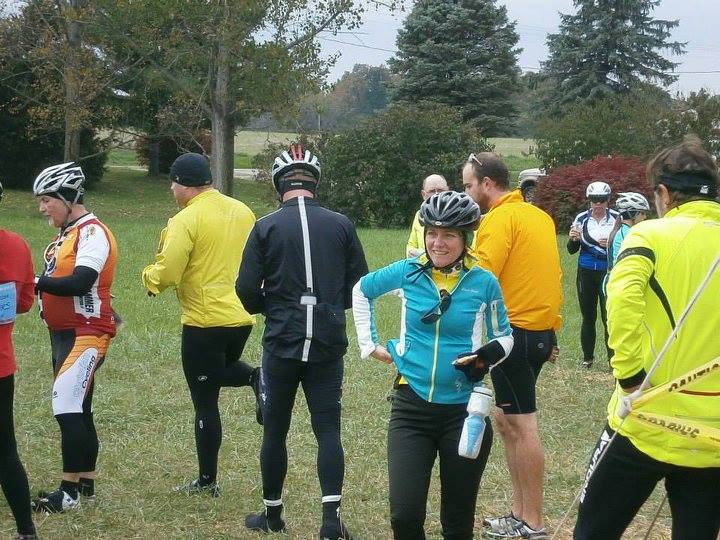 I hit downhill speeds that were exhilarating and climbs where I ran out of gears before I was half way up. It seemed as if every cyclist I met was smiling (or were those grimaces?) while they were either loading or unloading their bikes; whether they were on their bike or getting off it. I rode beside fat tire bike riders and skinny tire bikes. There were people riding that were well into their 70’s  and some that looked as young as 10. There were families riding together and young men and women cycling teams. Some people were wearing a full cycling kit and others were dressed in cold weather attire and sneakers. The one common denominator amongst us all was the love of cycling.

I didn’t make it up Tabor Hill this year. It was the one hill I couldn’t conquer but I know I’ll be back next year. I have the date already marked in my 2015 calendar and I’ll make the hotel reservations in about another month. I came home with a deep appreciation of what it takes both physically and mentally to do this ride. Now I understand a little bit more why everyone talks about the hills. Without those challenging and sometimes grueling hills, the Hilly Hundred just wouldn’t be THE Hilly Hundred.

I encourage many of you to try the Hilly. You are surrounded on the ride by beautiful scenery, great food and music, hills to climb, good shopping, lots of friendly people to be around, and most of all you’ll end the weekend with a sense of accomplishment that is well deserved.

Hope to see you the weekend of October 9th, 2015 at the Hilly Hundred.