If three is a charm four is priceless. That is the case for 3RVS member Gary Painter and Captain of the Fort Wayne Outfitters racing team. Gary recently arrived in Ogden, Utah to defend his three-time National Time Trial Championship after a 13-hour flight from the World TT Championships in Denmark.

One thing Gary had in his favor was the 34 km course, with 853 feet of climbing, was the same course that he won his famous Three-peat Championship on the previous year. 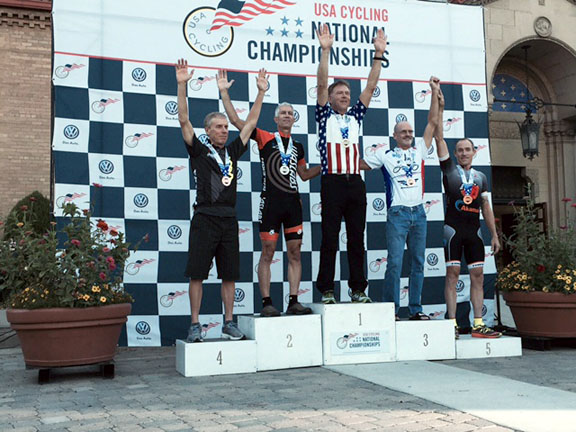 Being the defending National Champion Gary started last so he knew what time he had to beat. Just before he blasted off to defend his title Gary learned that 8 riders already surpassed his record time from a year ago of 47:12. So Gary knew he would have to dig deep. With the big climb early in the course Gary started off at a modest race pace to avoid getting into the red zone too early.

At the top of the climb his daughter Megan greeted Gary and was concerned his starting time was too slow for him to win again this year. But the true champion in Gary shined brightly after the climb. Gary lit up the course and demonstrated why he is the champion. As the race went on his speed kept increasing. When he blew by the finish line Gary’s time flashed on the timer 45:46.

He smashed his record time by 1:26 to win his fourth consecutive USA National Masters Time Trial Championship and crowned with the Stars & Stripes champion jersey once again. That my friends is priceless.

Gary, along with his team has trained very hard this year. His coach set up Gary’s training program so he would peak for the World Championships the week before. That training carried over well to the following week at the USA Nationals.

Congratulations Gary Painter. You are a true champion who has opened the door for so many local racers. We are proud to have you as a 3RVS member. You inspire many.